With the rapid rise of everything foiling, the demand for Windsurf and Wing foiling boards is growing. Such a fast evolving discipline demands that board shapes and construction keep up and custom boards offers riders the opportunity to try new and exciting designs to shape where we take this sport. Any board that is ridden with a foil has a different set of challenges than a typical displacement / plaining hull like a surfboard, windsurfer or twin tip. Dereck understands and pushes the limits of these design limits with his custom shapes.

“The very nature of using a foil to lift the board out the water means that weight is very critical. Every ounce in the board that is not used for strength has to be lifted out of the water so a light and strong construction is critical. Another misconception of foiling hulls is that they need to be shaped to plain early and so incorrectly some think it needs sharp rails and angles and large planning surfaces to get the boards to lift out the water. This is not true. The actual foils have evolved so fast and are so efficient that they can generate lift so early that the foil is actually creating enough lift to fly the board before reaching board planning speed. But this does not mean that the overall shape of the board and rails are not important. It is, bit for different reasons. These boards are basically flying now so aerodynamic considerations are employed and not hydrodynamic. Once the board is out of the water the apparent wind is very high, typically way more than the actual wind speed so the board has to be designed to minimize drag, create lift and most importantly be balanced aerodynamically moving through the air. Sharp rails, nose rocket and flatter bottoms like you typically see on early planing hulls drastically affected by the apparent wind and applies  forces on the deck changing the deck angle of the board. An equal amount of wind now passes under the deck as it does above it so this has to be considered. 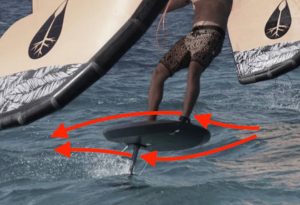 This apparent wind under, around and over the flying board can cause varying deck angle changes and because the angle of attack and bank angle of the foil in the water is directly affected by every slight tilt of change in the deck angle, an aerodynamically balanced board is important and is immediately felt by the rider creating a more stable and low drag platform. Evidence of this is next time you are at the beach on a windy day, pick up a conventional slalom windsurf board with a wide flat bottom and sharp rails and hold it into the wind the see how the wind affects the pressure on the board as you tile it. The boards typically wants to pitch up once the wind goes beneath and then also slam down if the nose is lowered and the wind goes over the deck. Not what you want when foiling. I use chimed rounded rails and carefully consider the boards passage through the air in all my designs. So a stable foiling platform is not dependent on the foil shape but the board also. It is not just the Foil creating lift, the board is also. Another vital consideration is the distribution of the volume. When the board is in the water you want it to basically float the rider in the riding stance that the rider would be in when foiling so minimal foot movement and balance point  changes are required when transitioning from submerged to a flying board. These are exciting times for board design as a shaper thanks to foils“  Dereck.

3 reviews for Custom Windsurf/Sup/Wing Foil Board